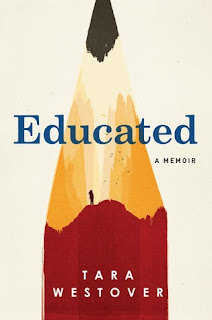 I was really pleased when Tara Westover's Educated was selected by my community book club as one of our non-fiction books to read. I'd placed it on my "to be read" list months ago. When Oprah's interview of Westover was going to be on TV, a member of the book club alerted me. I watched the interview even though I hadn't yet read the book. I found the interview thought provoking and I liked the way Westover talked about her experiences growing up as part of a family of survivalists. She was younger than I expected her to be. But that's neither here nor there. The book was ready for pick-up from the library a few days later.

This is probably going to sound ridiculous but what I didn't enjoy about the memoir is the lyrical nature that Westover uses to tell her story. When she was speaking with Oprah, her language was both accessible and engaging. I was put off by the language used in the book and felt that I would have enjoyed it more had she written the way she speaks. I wish I could more clearly articulate where I'm coming from here, but if you read the book, I think you might understand. Don't get me wrong. The language was beautiful. But it slowed down my reading and at times distracted me from the almost unbelievable tale that Westover shares.

As mentioned, Tara is one of seven children raised by parents who are survivalists. New Years Eve Y2K was their "World Series" and when January 1, 2000 was an ordinary day like the day before, it's like they lost the game. Tara's father ran a junkyard and had some small construction business. Tara's mother was the family healer, became a midwife, continued to heal. Maybe because of the family's propensity to get injured in serious ways, Tara's mother gets into essential oils. And when the father, after being burnt alive in a fire, can no longer work, he joins Tara's mother in that business. It sounds like they created a financially successful business after many years of barely scrapping by.

Tara and her siblings weren't homeschooled. Their education was the school of life. Most of the children didn't have birth certificates and had never stepped foot in a classroom. The family eschewed traditional medication. The father, especially, had a huge distrust of the government. They belonged to the Mormon church which does inform the story in many ways.

One of Tara's older brothers goes to school, takes the ACT and goes to college. He encourages Tara to do the same. She's completely self-taught, needed to take the ACT two times to get a high enough score to be accepted into Brigham Young University. She struggles financially to complete her degree but meets professors and a pastor who help her along the way. I found Tara's experiences in being exposed to the larger world, to everyday living and to history she never learned about, the most interesting part of the memoir.

The memoir is grizzly. It's not an autobiography. It's Tara's memories of growing up. And they are rough to read. Lots of reviewers have found the stories unbelievable. Whatever the truth is, I am sure these are Tara's memories, and isn't that what the memoir genre is all about? She's got a terribly abusive brother. My heart ached for Tara's mother's parents who seemed appalled by the choices their daughter had made and the way she was raising her children.

Even though the book was laborious to me, the primary message is a good one. It highlights the importance of education - untraditional or traditional. I'm just curious what the rest of Tara's life will be like. She was only 30 at the time she finished writing, she hadn't been out of school that long. What is in her future? I would totally recommend this book to a book club. It screams out to be discussed. I'm really looking forward to my book club discussing it in September.

Tell Me How This Ends Well 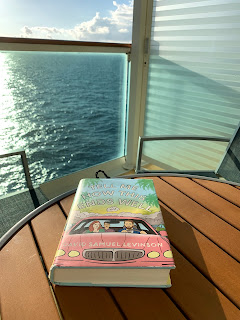 The Jewish book club I'm trying to get rolling remains really small. At last month's meeting, there were only 3 of us - and a guest. (Thanks, Martha!) When it came time to pick a book for our next meeting in July, I was told by the other two members, who had already read David Samuel Levinson's Tell Me How This Ends Well, that we didn't have to read this book but that it had a really crazy ending. "Let's find another book to read." I hadn't read it yet.

An important premise of the novel is that Israel has been annihilated by three Arab neighbors and there is an influx of Israeli refugees living in the United States and in Europe. Antisemitism was on the rise. That's important, but that's not what the story was about.

The story revolves around the Jacobson family. The Jacobson mom has been given a poor health diagnosis. The three adult children decide that they should spend their mom's final Passover together at the home of the older brother in California. Jacob travels from German, Edith travels from Atlanta, and the parents travel from Texas. They kids plan to celebrate Passover with a family seder - which is part of a reality TV show - and then kill their abusive dad. Yes, you read that right! Kill their abusive dad.

This book, in parts, is comical. The story is told from the perspective of all the children and then from the mom's perspective. In some parts it's dark humor. In other parts, it's laugh out loud funny.  It also gives us a dark vision of what might be in the future of American Jews. That part is frightening. It's hard to really categorize this novel - religious commentary, dysfunctional family, crime drama, and I wonder if that was the author's intention.

While the religious commentary was downright scary and the crime drama was where a good part of the humor came into play, what intrigued me was why the mom, Roz, stayed with the dad, Julian, for all those years if he was so abusive. First thought was that perhaps "in those days" it was difficult for a woman to consider getting a divorce. Then I realized that Roz was only 8 years older than I was, that she contemplated getting a divorced in 1996 - which is exactly when I was in the middle of getting a divorce! Would my family life have fallen apart the way the Jacobsons did had I stayed married? That gave me a lot to think about!

I read this novel while I was on vacation. I guess because it was lighter than what I normally read it might be considered a beach read! I decided that this book is chockablock full of things to discuss. I think it will make the perfect book for a Jewish book club, even though I don't think you have to be Jewish to enjoy it. Now to convince enough other people that this is a worthwhile read so that we can have a larger attendance at our next book club meeting.