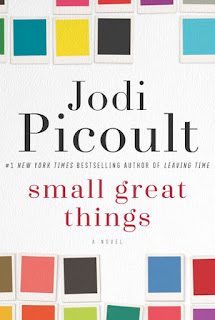 I seem to think that readers of contemporary fiction either love Jodi Picoult or hate Jodi Picoult. I am a fan... and that might color the way I read and review her novels. Jodi Picoult takes contemporary issues (in this case it's race) that she takes from real news sources. She expands them into a fictionalized version of their earlier selves, tells the story from many different points of view. There's a trial. And there's a twist. It's her formula and it works really well. At least I think so.

Small Great Things was no different. But unlike many of her other books, this one was so incredibly thought provoking and one that will stick with me a long time. It made me rethink my views on race in America, something I will continue to ponder over. Prior to reading the book, I thought I knew how I felt. Now I'm not so sure.

The story centers on Ruth, a black nurse in a Connecticut hospital, who is forbidden to care for a newborn baby, Davis. Davis, named after Confederate president, Jefferson Davis, is the son of white supremacists, Turk and Brittany. When Ruth is conveniently the only medical staff person around when Davis starts seizing, stops breathing and dies, she becomes the easy target to blame for Davis' death.  Ruth gets arrested, her public defender is Kennedy, the character in the story that I most related to. Like me, Kennedy thought she knew how she felt about races and racism. Like me, Kennedy had to rethink a whole lot of things. Things like white privilege. I knew it was there... but never really thought about it much, just because, well, it was...

The character that I found most fascinating was Turk. He was the window to learn about different groups of white racists. It was unsettling for the most part but it made me understand that the different groups feel differently about the races and their ways of making things right (in their) worlds can be quite different. I don't know that the differences will really stick with me but the quality of the hate and the anger, that will remain with me a long time. It also gave me insight into some of the racial tensions that I see brewing around me. A usual history and current events lesson all rolled into one.

Picoult weaves real life race issues into the novel. There are references to Trayvon Martin, Eric Garner and several others. She even has a fictionalized version of Reverend Al Sharpton.

Some reviewers of Small Great Things found Ruth and her sister, Adisa (previously known as Rachel) as the least believable characters of the novel. They comment that Ruth and Adisa are caricatures of the groups they are meant to represent. I'm not 100% sure about that. Yes, Ruth goes on to get her graduate degree at Yale, to live in a nice neighborhood, to raise one son who is an all-star student in a good high school. Adisa lives in the projects with her five children, although we are reminded that they all had the same father.

Ruth and Rachel were the daughters of single mom, Lou, who worked as a domestic in the home of a wealthy family in Manhattan. They were raised in Harlem. (My one source of serious irritation with the novel was when someone asked Ruth if she was from Manhattan and she said, no, she was from Harlem. Is it my whiteness that has always made me think that Harlem was in Manhattan? Or did Picoult goof here?) Ruth showed academic giftedness at an early age and Lou's employers helped facilitate Ruth's entry and scholarship to be able to attend Dalton, a prestigious private school in good neighborhood. Rachel continued going to her local school up in Harlem. That's when the sisters begin to drift apart, inhabiting totally different worlds. Ruth becomes closer to Lou's employer's daughter, Christina, than she is to her own sister.

It's Ruth and Christina's relationship that really forces those two characters to think about their differences due to race. Quite interesting thoughts at that.

Another comment I saw in more than one review was that Picoult was clearly writing for a white audience when she wrote this book. She most probably was. But to me, a white woman, it didn't diminish the story or how thought provoking I found the novel.

If you're already a fan of Jodi Picoult, I predict that you are going to love this book. If you're not, you might pick apart the story and the characters, and you might really dislike the novel, but I bet you will start rethinking about your views on race and racism. It was an easy read, even with its heavy subject matter. I was able to finish it in two sittings (on my flight to New York and then finished on the flight home). I've read some good books in 2016, but this one, most likely the final book I'll finish this year, stands out as one of the best.

I have been remiss in not posting while reading A Breath of Snow and Ashes (Outlander #6) by Diana Gabaldon. It seems like I started the book months ago, then had the problems with Overdrive, then while I was waiting for the e-book to become available again, I had book club books to read. But finally had a good long reading session yesterday and finished Book #6. 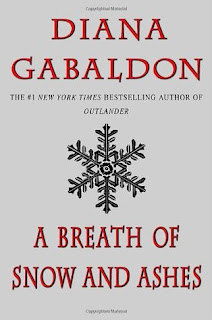 You may or may not recall that after Book #5, I felt as though I was at a good point in the series to take a break and get some other reading done. I kind of knew what might happen next, just not what it might mean. Well, after the conclusion of Book #6, I immediately went in search of Book #7. I really, really, really want to know what happens next! I'm not at a good breaking point at all!

I can't really tell you what the book is about since I can't really recall where book #6 started. The bulk of the book was about the days leading up to the American Revolution. What was especially interesting to me is that most of the American Revolution history that I already knew was related to New York, New Jersey or Pennsylvania. I'll even admit that I never really gave much a thought to what was going on in North Carolina before or during the early days of our country. (In my little teeny mind, prior to reading this book, North Carolina didn't become a player until the days leading up to the Civil War. Have I mentioned that I love a book where I learn something new?)

I also won't tell you what happens at the end of the book, the type of cliffhanger I'm now left with. That would be a spoiler and I'm determined not to include spoilers when reviewing or writing about books. Suffice to say, it's a major cliffhanger and I can't wait to see what comes next. I'm #3 on a waitlist for the e-book.

That should give me a little time to get some other reading done while I wait.

Who I recommend this book to? Anyone who is hooked on the Outlander series!

Last night I started the January Books & Beer Club pick - The Hobbit by J. R. R. Tolkien, another classic that I've never read. Fantasy is not my cup of tea so I wasn't even sure if I would take the time to read this one. So far, it's not quite what I expected. I'm not sure what I expected. And it's a much quicker read than I imagined it would be. Stay tuned for my review. 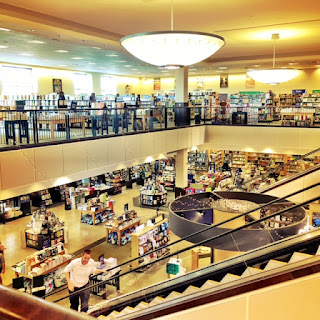 The banning of books

Yes, I've been reading Outlander (#6 A Breath of Snow and Ashes) meaning I have nothing new to review. I feel like that gives me nothing to write about.

I've had some great book talks with my sister-in-law, neighbors and friends with probably a dozen titles added to my "To Be Read" list. Are you following me on goodreads?

Why am I writing about banned books today? Isn't Banned Books month in September? I saw a news story the other day and it's weighing heavily on my mind. After a parent complaint to a school district in Virginia, To Kill A Mockingbird and The Adventures of Huckleberry Finn have been temporarily banned. The parent's complaint was that the racial slurs (the language in the books) distressed her mixed-race son.

Just a few months ago, after I read The Adventures of Huckleberry Finn for probably the first time (shocking, I know!), I came across an article debating whether or not the original book in Mark Twain's words should be read or should a book with "nicer language" be read instead. (My commentary here.) At the time, I felt strongly that it was important to read the original with students for all the teachable moments.

Aren't these books the ones that need to be read and discussed? And yes, discussion is key in the reading of books that might be "uncomfortable."

Do we want to simply give lip service to racism? Is it enough to say "Never use the n-word?" Or do we want our youth to understand the implications. What easier way to give enough exposure for a meaningful discussion than be reading a book.

Racism is real. It exists today. It existed in the time of Scout Finch and Huck Finn. The two books in question might be fiction but each one is based on the realities of the time periods in which the books are set. These stories challenge prejudice. They don't encourage it. They don't suggest it. They don't condone it. Isn't fiction a great starting point for discussions about icky subjects? And isn't it important to learn lessons from the past so that maybe the future can be a brighter, more peaceful, less hateful time?