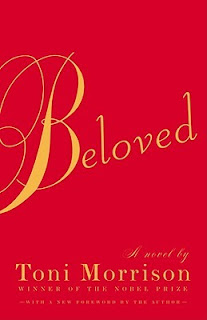 Yes, I finally finished Toni Morrison's Pulitzer Prize winning novel, Beloved. Yes, I did say finally. I didn't love Beloved. I certainly didn't hate it. Who knows. Maybe I did. I found it an extremely difficult book to read, in so many different ways.

In case you have no idea what Beloved is about.... I had no idea what it was about even though I've seen it on so many lists of books a serious reader needs to read... it's a story that takes place in Ohio and bounces around the years leading up to the Civil War and then maybe 10 years after. It's the story of Sethe, a runaway slave, who is the mother of 4 children. There's her 18-year old daughter named Denver who lives with her. She had two older sons who left home and she has no idea where they are. The fourth one, a girl slightly older than Denver, died (no spoiler, we learn this pretty early in the story). Sethe didn't have enough money for the inscription on the girl's gravestone. She had just enough to get "Beloved" engraved on the stone.

Unlike most slaves, Sethe's last owners at Sweet Home were kind. They allowed her to "marry" a fellow slave, Halle. As is rare with slaves, all 4 of her children had the same father. Her owner never had his way with her. The slaves that were the property of the Garners were treated pretty fairly or as fairly as slaves might be treated. Halle was able to work outside and buy his mother's freedom for her. Until Mr. Garner died and Mrs. Garner sends for a relative referred to as "schoolteacher" to run the place and who is the complete opposite of kind. The slaves talk about running away, they make a plan. In the end, Sethe sends her three children alone with someone to her mother-in-law in Ohio. She follows shortly behind, giving birth to Denver with the assistance of a white woman while she is in the process of escaping. That's probably enough of a recap of the story without giving too much away.

I still haven't reviewed Beloved on goodreads.com. I have no idea how many stars I feel that it might deserve. I have, however, read through many of the reviews online since finishing yesterday. Based on reviews, Beloved is the type of book that people either love or hate. It's got a lot of 5-star reviews and a lot of 1-star reviews. I honestly don't know how I felt about the book.

Things I do know:
This will probably be one of the books where I feel the need to come back and share with you how our book club discussion goes.

Update: I was one of only two people at Books & Beer Club last week that didn't love Beloved. The other woman who didn't love it likes to read happier things. She didn't like Everything that Rises Must Converge, the collection of Flannery O'Connor short stories that we read last month. And I loved that. One woman said she sat down and read the book in one sitting. I truly can't imagine.

The book club discussion was, as I expected, a good one. One of our members came with lots of information about Toni Morrison which was very interesting. We spoke about the book longer than we do with most books. Did it give me a better appreciation for the book? Not exactly. It made me realize that I did appreciate the strength and power of Toni Morrison's words. By not loving it, I didn't appreciate it any less than those who did love the book. I still believe, though, that this is a book best read when you know you'll have someone to discuss it with.
Posted by Susan R Pellegrino at 6:22:00 PM 5 comments:

No concentration for reading 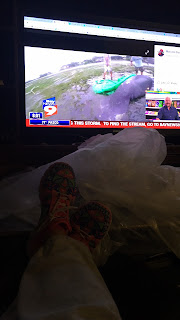 Reading is my comfort. My escape from the real world. Until it's not...

During the wait for Hurricane Irma to arrive, I never even thought to pick up a book. We had power... and I wasn't sure for how long. I figured I'd stay glued to the TV as long as I could. Plus, I'm still reading Beloved on my iPad which I'm kind of struggling with. (The language makes reading slow and the content is brutal so I can only read in small doses.) Didn't want to waste iPad power if we were going to lose power eventually. (We never did lose power.) Additionally, I had too much nervous energy so when I wasn't just sitting on my chair staring at the TV, I was going around the house tweaking our pre-storm preparations.

We certainly dodged a bullet. We never lost power. Never lost water. Only had minor damage in our yard.

The wind and rain were battering last night. I couldn't sleep... nor could I read. Exhausted today, with warnings to stay off the road and too exhausted to undo my hurricane prep, I managed to lie down for a nap, still couldn't sleep but was able to read.

Two more storms are in the Atlantic. Hurricane Jose looks a little like he doesn't know what he's doing. And Lee... you don't really want to be a hurricane, do you? I just want to be able to read in peace!
Posted by Susan R Pellegrino at 2:25:00 PM No comments:

I've been so focused on what Hurricane Irma is and isn't doing that I totally forgotten I'd never reviewed The Accidental Tourist by Anne Tyler. It was recommended to me by several members of my community book club when we discussed A Spool of Blue Thread last month. 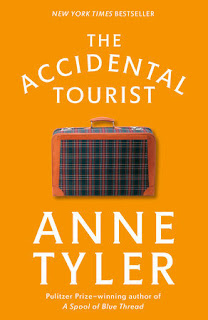 Before I forget, The Accidental Tourist became a movie in 1989, 4 years after it was published as a book. And while not major characters, there was a neighbor named Sue and a niece named Susan. It was also National Book Critics Circle Award for Fiction that year.

Macon is a reluctant travel writer. He hates to travel and writes travel guides for businessmen whom he presumes don't like to travel either. His son has been murdered and his wife has left him. Macon was also born into a family that likes to keep things very routine. Macon and his siblings put the "quirk" in "quirky." This makes his entrance into single-dom after marriage quite entertaining.

Some of the most interesting scenes in the story were when Macon was still living home, trying to make things easier - sleeping in a sweatsuit so he wouldn't even need to get dressed. Oh, and yes, he did wash the sweatsuit - while he was wearing it in the shower! He created a crazy kind of laundry chute. At this moment I can't recall why he needed a laundry chute. He sewed sheets into sleeping bags so he wouldn't have to make the bed or change the linens. He washed his clothing in the bathtub while taking his shower.

This book was all about the characters. We see Macon go from unhappy married man and transition several times. We watch Macon's sister, Rose, develop into a full-fledged character. The brothers remain caricatures but they're of real people. My favorite characterization in the book was of Macon's boss, Julian. 'A dashing sailor, a speedy driver, a frequenter of singles bars, he was the kind of man who would make a purchase without consulting Consumer Reports.'  Imagine that!  (My dad wouldn't make a purchase without consulting Consumer Reports but he was not nearly as set in his way as Macon was.

Muriel, Macon's dog trainer, was a character herself. And I mean that in the non-literal sense! What a character! She had another one of my favorite lines.

Do you remember the days of calling TIME? A younger person reading the book - or reading this post - might not have a clue about what that's all about.

The people in Macon's life refer to Muriel as "this Muriel person." That made me smile, too. My mother had a friend that was referred to as "that Doris."

I liked the characters. This novel begs you to think about whether or not it's enough to like the person you when you're with someone and you don't necessarily need to feel love. Who brings out your best self?

I would only recommend this book to people who don't need a lot of action in a story. There's a level of sadness in the novel. A child being murdered, elements of divorce, neglect by a parent. On the other hand, there are humorous warm moments dealing with relationships we have with others and with ourselves.